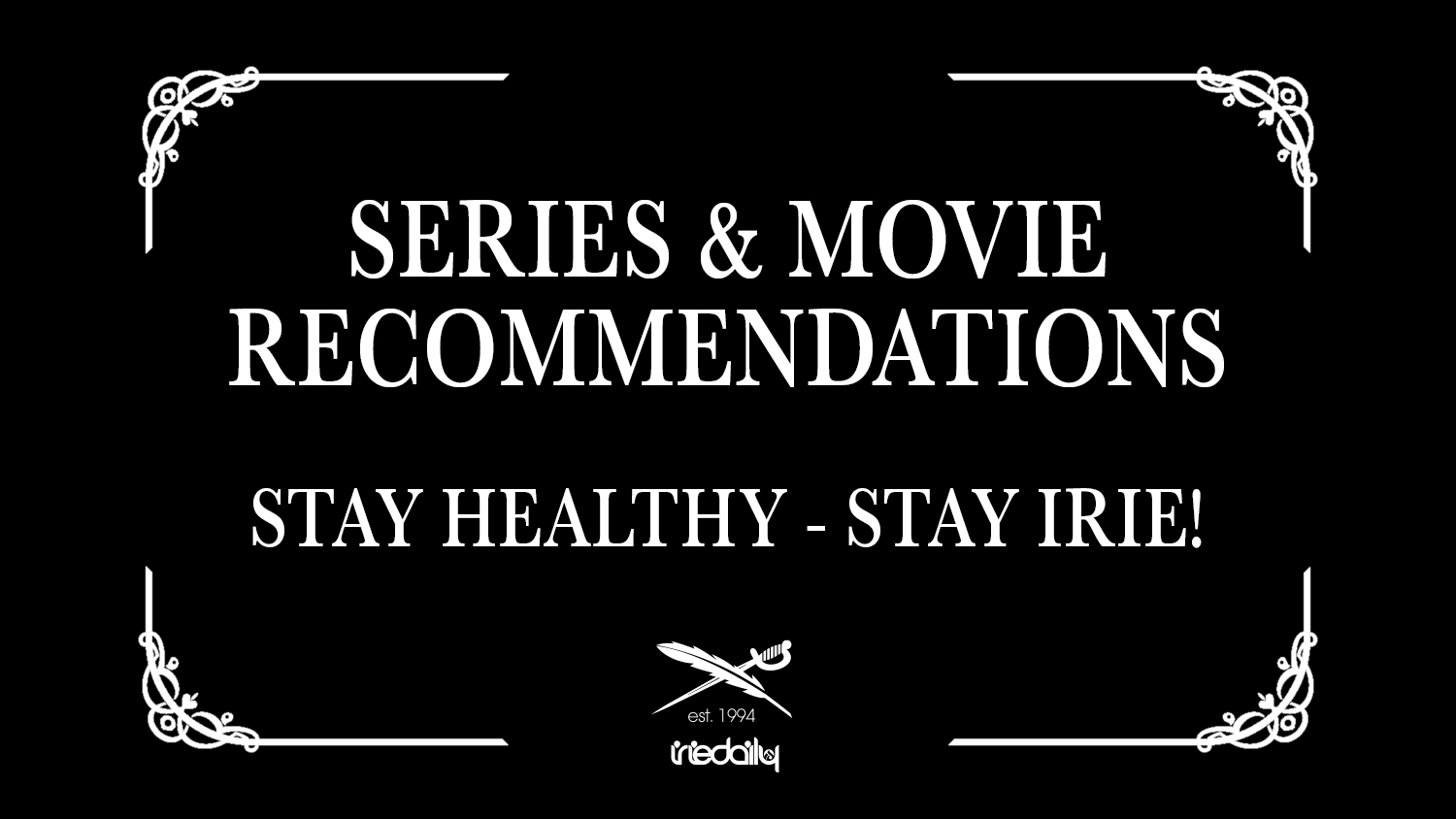 Since public life is considerably restricted by the current corona crisis and, in addition, all leisure and cultural facilities are closed, we are forced to spend more time at home. Maybe it is time to take a look at the bookshelf, get out the painting palette, tidy up the picture gallery on your computer or to deal with your watchlist, which you always wanted to ” finish”. Your list is not yet full? Then here are the series & film highlights for March as well as other film and series recommendations that are perfect for binge watching. STAY HOME, STAY HEALTHY, STAY IRIE!

Money Heist
Finally, the Netflix series “Money Heist” enters the next round! The 4th season of the series about the robbery of the Spanish banknote printing facility starts on 03 April. Many questions are open: Will Nairobi survive? What will happen to the professor? Will the Inspectora make the deal with the police? Find out!

Suits
After Sky already dropped the 8th season of Suits in March, here comes the next big thing! In April, the 9th season will be released, which is also the final season. Starting 29 April, you can watch new episodes with New York lawyer Harvey Specter for the last time.

Tales from the Loop
On 03 April the new Amazon Prime Video series “Tales from the Loop” will be launched, which should especially appeal to science fiction fans. The series is about a small town and its inhabitants living in a “loop”. The Loop is a machine with whose help scientists hope to further explore the universe.

Bosch
The Amazon Prime Video series about the cop Harry Bosch enters the sixth round on 17 April! Be there when Bosch solves mysterious and obscure criminal cases again!

The Last Kingdom
Fans of this Netflix series can be happy! Because on 26th April the 4th season of “The Last Kingdom” based around the main hero Uthred will be released! Uthred is an Anglo-Saxon who was raised by the Vikings and is now in constant conflict with his loyalty. He always has only one goal in mind: The reconquest of his homeland Bebbanburg.

Suits
Harvey Specter is one of New York’s most popular attorneys and has quickly made a career with the renowned law firm Person Hardman. When he was promoted to senior partner, he had to hire a young lawyer as an associate. His choice is the highly talented Mike Ross…
Since the beginning of March the 8th season of the series “Suits” is finally available on Sky Ticket!

Elite
Three students from poor backgrounds receive a scholarship for the elite school ‘Las Encinas’ in Spain. Soon they clash with some wealthy classmates, which eventually leads to a cold-blooded murder…
Since a few days the 3rd season is available on Netflix. Attention: Binge watching is guaranteed!

ZeroZeroZero
The new series “ZeroZeroZero” is about the international drug trade. The narrative will follow a cocaine shipment from Mexico to Europe and will shed light on the power struggles between drug barons and the bosses of organized crime.
In Germany, the series will be launched on Sky Atlantic on 26 March.

Freud
In order to establish himself in 19th century Vienna, the young Sigmund Freud sets out to solve bloody mysteries with a medium and a commissioner.
This new mystery-crime series will be available on Netflix from March 20.

Ozark
Marty secretly works as a money launderer for the second most powerful drug lord in Mexico. When a conflict arises between the two, he changes his location out of fear. His drug lord makes new demands, which he is supposed to meet.
You can watch the new 3rd season on Netflix from March 27th.

Feel Good
Stand-up comedian Mae Martin throws herself into a relationship with her former heterosexual girlfriend and has to master the challenge of abstinence.
This new comedy series starts on 20 March at Netflix!

Greenhouse Academy
At an elite boarding school in California, groups of students spread over two different houses are in a permanent rivalry. When they uncover a secret, they join forces to prevent a diabolical conspiracy.
Finally, the continuation of this series is coming. Season 4 will be available on Netflix from 20 March.

Unorthodox
The young Hasidic Jewess from Brooklyn escapes from an arranged marriage and finds accommodation with a music group in Berlin. But then her past catches up with her.
The start of the Netflix series is on 26 March.

Spenser Confidential
Spenser, a former cop and convicted felon, is working with amateur boxer Hawk in Boston to investigate a dark conspiracy involving two police officers.
This action comedy has been available on Netflix since early March.

The Hunter
Martin David is a highly paid mercenary for special tasks. An unscrupulous biotech company sends him to Tasmania to find a mystical and probably extremely profitable creature: the last Tasmanian Tiger. Martin is ordered to hunt it down and secure its genetic material.
This action movie will be available for free on Amazon Prime from 28 March.

How to Party with Mom
A divorced housewife reshuffles the cards. At her daughter’s university she wants to catch up on her degree and enjoy student life to the fullest.
A funny comedy that you can now watch on Netflix.

These series are real evergreens and never fail! And you don’t even have to start at Season 1 Episode 1, instead you can confidently choose a random episode. Easy to watch, high entertainment value!

Here come our further series recommendations, which we have already watched and found to be very good. There should be something for everyone! Of course there are also plenty of classics, which many of you have probably already seen. But some of them are so good that it’s worth watching the series a second time!

– Narcos | The rise and fall of the drug baron Pablo Escobar and the Colombian drug cartels.

– Riverdale | Archie, Jughead, Betty and Veronica have to deal with many murders in their hometown Riverdale.

– Prison Break | The spectacular prison break of Michael Scofield and his brother Lincoln.

– Money Heist | The meticulously planned heist of the Spanish banknote printing facility executed by the Professor and his team.

– Sons of Anarchy | The story about Jax Teller and his motorcycle gang called Sons of Anarchy. Gun trafficking and wars with rival gangs are on the daily agenda.

– Orange Is The New Black | The comedy drama about Piper Chapman, who suddenly has to go to women’s prison because of a crime many years ago.

– Quantico | After Alex Parrish was trained as an FBI agent at Quantico, she is accused of a major terrorist attack in New York.

– How To Get Away With Murder | Top lawyer Annalise Keating trains law students at Middleton Law School until she and five of her students become involved in a murder case themselves.

– Queen of the South | Teresa Mendoza gets involved in the Mexican drug cartel in an unfortunate way and now has to succeed there in order to survive.

– 4 Blocks | The German series is about the Hamady family and the rival clans in Berlin. Drug dealing and problems with the police are part of everyday life.

– Breaking Bad | The chemistry teacher Walter White tries to get the treatment costs for his cancer by selling Chrystal Meth.

– Lost | The passengers who survived a plane crash try to survive on a mysterious island.

– Dark | In the centre are four families in a typical small German town called Winden. Two children suddenly disappear in a mysterious way.

– 13 Reasons Why | Student Hannah Baker commits suicide and leaves her classmates cassettes with 13 reasons why she decided to take this tragic step.

– Sex Education | Nerd Otis has all the answers thanks to his mother, a sex therapist, and offers a sex clinic at his school. There is only one problem, he has no sexual experience himself.

– Peaky Blinders | The story of the Shelby family and rival gangs in Birmingham in the 1920s.

– Pretty Little Liars | When her friend Alison disappears without a trace, the lives of Aria, Spencer, Hanna and Emily change suddenly. They receive mysterious messages and threats from an anonymous person named “A”.

– Bad Banks | An investment banker works for a bank in Frankfurt on the recommendation of her ex-head. The pressure on Jana is increasing rapidly, as she urgently needs to close a deal while the rest of the team turns against her.

– Babylon Berlin | In the Golden 20s, the young inspector Gereon Rath is transferred from Cologne to Berlin. His investigations in the Reich capital lead him into a swamp of drugs, corruption, art and extremism.

– The Wire | Where policemen and drug dealers stalk each other and a postmodern Robin Hood is on the loose. A look at the Baltimore judicial and police battle against crime.