So what does CSR actually mean? CSR is the official acronym for ‘Corporate Social Responsibility‘, meaning that a corporation is committing itself to a sustainable economic development – on one’s own authority, by choice and beyond any legal regulations. For that matter a specific focus is set on the responsibilities towards the actual environment as well as on the key markets, towards commercial partners (such as manufacturers e.g) and employees.

As a company based in Berlin Kreuzberg, we consider it our responsibility to actively participate in local projects in addition to supporting sponsoring, as well as to help supra-regional anti-racist projects and offer apprenticeships. We frequently support many great projects by donating money or clothes.

For the local football club FSV Hansa 07 in Kreuzberg we have already produced several jerseys protesting racism. We are also happy to support Hansa with merchandise and equipment for the volunteers! #catenacciogegenrassismus

In order that IRIEDAILY can also make a small contribution to the protection of the rainforests, we have already done some fundraising for the tropical forest foundation OroVerde. Thus we do not only support the reforestation by planting new trees, but also long-term protection projects and the further education of the local people. Stay tuned for the next campaigns!

In addition, we have been supporting the association “Opferperspektive” (Victims’ Perspective – Solidarity against Racism, Discrimination and Right-Wing Violence) in Brandenburg for a long time, for which we also ran a fundraising campaign in October 2020.

Another example is Aktionsbündnis Brandenburg, for which we produced “Schöner leben ohne Nazis” T-shirts, whose proceeds went 100% to projects against right-wing extremism. 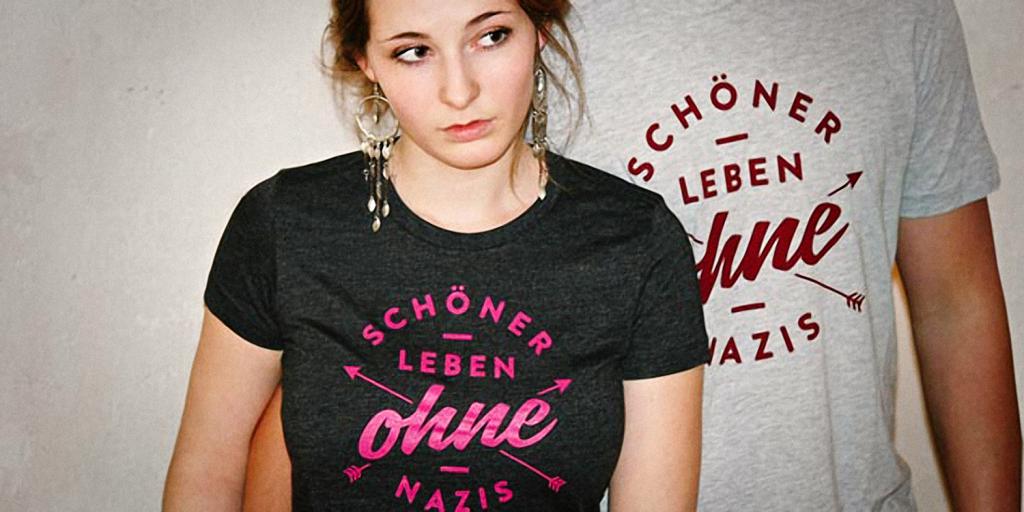 Since the beginning of 2020, we have been the sponsor of two fruit trees at Hof Grüneberg in Brandenburg. By supporting the project “Stark wie ein Baum” (Strong as a tree) of the Hof Grüneberg Foundation and the Caritas children’s hospice service, we not only support an important nature conservation project, but also help families with a seriously ill child or teenager.

But also the refugee aid project “Kreuzberg hilft“, the Berlin initiative Radbahn and the Berlin BMX park Mellowpark are among the numerous projects which have already been supported by IRIEDAILY.

Some donation projects are rather small and discreet. We donate clothes directly to an aid organisation for Tibetan schoolchildren or support a private project of the Berlin photographer Daniel Reiter, who supports young skateboarders in Addis Abada, Ethiopia with textiles and skateboard hardware.

Due to our general ethical and personal stance, our beliefs and entrepreneurial ideas, it basically is just a corollary that we’ve now joined the Fair Wear Foundation. The Fair Wear Foundation addressed itself to the task to provide and care about accurate working conditions and operating processes in the actual places of production within the textile industry.

For over twenty years, a part of IRIEDAILY’s collections is manufactured in Portugal, and the relationship to particular manufacturers has been a very close and trusting one ever since. Over the years manufacturing facilities in China were added, to whom a straight and long-term collaboration was established as well.

Our aim is, with the help of FWF, to allow the best possible and most transparent way of communication and exposition of our production processes for both – our manufacturers and clients alike. Since 2016 IRIEDAILY has been a member of the Fair Wear Foundation and after only two and a half years we have made it from Beginner Status to Leader Status, which we have been able to hold to date. We are proud of this achievement and looking forward to continue the work with the FWF. The permanent control and continuation of the fair working conditions in our factories are our goals for the future. More about the topic Production can be found here!

Sustainability and environmental awareness are at the top of IRIEDAILY’s priority list. In addition to points such as climate protection, environmental protection and animal welfare, transparent trade channels, the use of biological and recycled materials as well as social responsibility towards employees and workers in production play an important role. Becoming a sustainable company does not happen overnight, but step by step we try to make our contribution in the different areas.

Here are some of our achieved milestones:
– Increased use of sustainable materials (organic cotton, recycled polyester & nylon, cork, etc.)
– Leader status within the Fair Wear Foundation
– {PETA-Approved Vegan} – Label for all vegan items
– Environmentally friendly shopping bags in Brand Stores and Outlet
– Click & Collect service in Berlin
– Change from plastic bottles to reusable MIZU drinking bottles for all employees in the office

Find out more about Sustainability here!